There will be a Kick-Off meeting for the development of the White Oak Nature Center Monday, November 3rd at 6:00 PM. The meeting will be held in the Secondary Food Services Building and is scheduled to last about forty-five minutes. You will learn about the vision for the Nature Center and be given a chance to sign up for committee service, if you so choose. There is no obligation, just an opportunity to learn about a project that I feel will be beneficial to the students of White Oak at all grade levels for many years to come.
Check your schedule and plan to attend if you can. I think you will be please with what you see and hear. 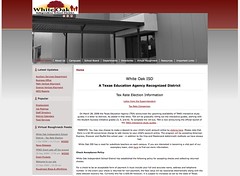 White Oak Independent School District recently unveiled a new website district-wide. The new site is intended to offer parents and the community an easier to navigate portal into the school system. It also gives the teachers and administrators more options for sharing information.

Community members are encouraged to visit the campus sites and see just what our teachers and students are involved in both inside and outside of the classroom.

The site make-over was handled in-house with WOISD staff and took roughly a month to complete. The district’s web address is still www.woisd.net. Campuses can be found linked from the main page, or you can find them at the following URL’s:

This site update is just the beginning of a number of web-based offerings White Oak ISD plans on unveiling over the next few months. Stay tuned.

White Oak ISD has announced a Tax Rate Election for October 11, 2008. Early voting for the election will begin September 24, 2008 and end October 7, 2008. Times and location for the voting are included in the election notice published in today’s Independent. I would like to present some information to you as voters that can be helpful in making an informed decision in this election. The purpose of this letter is not to persuade you to vote for or against the proposed tax rate. This letter is meant to give you accurate information about the request that has been made by White Oak ISD.

On August 4, 2008, The Board of Trustees at White Oak ISD adopted the budget for 2008-2009 and set the tax rate at $1.24 per $100 value. The tax rate includes a $.13 increase for maintenance and operation of the district. The total tax rate represents a five cent increase per $100 value over the $1.19 tax rate of 2007-2008. The increase will allow the district to increase revenues by approximately $680,000. That increase includes money generated through local tax collections and extra state aid.

There are four points that I want to present to the voters concerning the request for this tax increase:

There is a great deal of information to digest when it comes to school finance and what is best for all stakeholders of the district. Please know that the Board of Trustees at White Oak ISD are doing their very best to meet the needs of our students and be good stewards of the taxpayer’s money. Many of you will have questions about the proposed tax rate and I encourage you to contact a school board member or call me at 903-291-2201. I will be glad to meet with you individually or in a group setting to help clear up any confusion or concerns. Thank you for your time and for all the support you give to White Oak Independent School District.